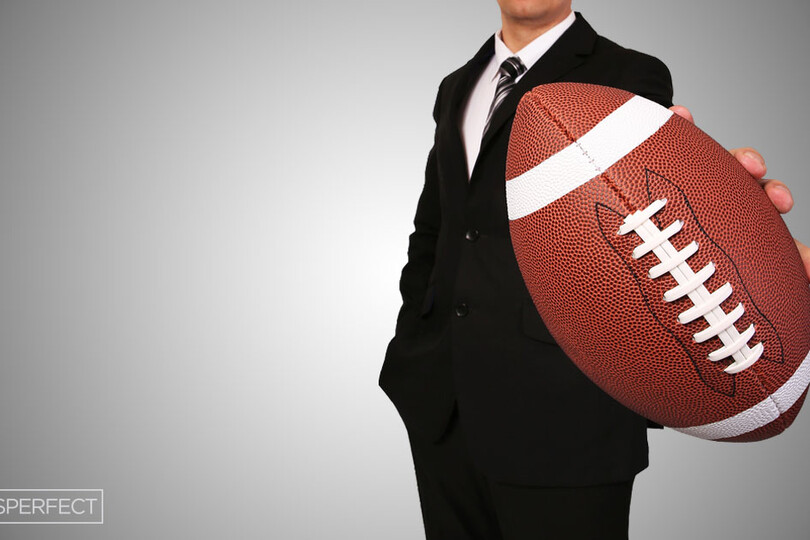 Another draft season has come and gone, and every year I relive the thrill and wonder surrounding these athletes as they are chosen to hopefully help an NFL organization perform at the highest possible level. Each Spring I find myself noticing how the draft mindset expands beyond the NFL, and into organizations like our own—building teams that believe in fellow teammates and who stay calm in the face of adversity are goals to which all leaders strive.

During a slow start to a 2014 season when the Green Bay Packers were down 1-2, Aaron Rodgers famously told fans, “Relax. We’re going to be okay.” At one point, Aaron Rodgers was a draft pick like any other NFL player. High performance characteristics coming to life, like this famous call for composure, are what make the draft season so exciting.

As a kid growing up in good old Philly, watching the NFL on Sundays with my family was a ritual. My father was an Eagles fan for 56 years and his love of the game is very much in my DNA. There is a lot of time and anticipation for football fans between the Super Bowl and the start of the next season. When the confetti has fallen at the Super Bowl and the winning team’s MVP says he is going to Disney World, I know the season is over and that winter hiatus has begun until at least April. To keep our interest, there is always the speculation of what teams will do in the offseason, but the draft is the big spark of energy, hope, and curiosity about the next season.

Beyond the excitement, there are subtle lessons in cultivating a team. As much as it pains me to give credit to the Patriots, one can’t help but wonder how they manage to excel year over year. It is more than Bill Belichick and a seemingly ageless Tom Brady. Every year, I see these teams perform a delicate balancing act that can be applied to more than just building great football teams.

“Successful teams build in the draft,” says John Elway, the General Manager of the Denver Broncos (who happens to be my favorite team). If you look at the most successful football franchises (especially in an era of free agency), the best ones mostly build their teams in the draft. A smart evaluation of the player’s skills, their on- and off-field behavior, their family and peer circles, and their willingness to learn and participate in the team culture can lead to a pick or series of picks that might revolutionize performance on your team.

There are three things that jump out to me about the most high-performing teams:

1. They are strategic and conservative with “free agent” picks
2. They focus on building their teams in the draft
3. They build for depth

As companies looking to maximize our investments in time, effort, and expense, free agents in our respective industries are very appealing on paper. They are battle-tested and have references to validate proven histories of performance. Picking up an elite free agent can be like capturing lightning in a bottle. However, the free agent isn’t going to guarantee performance simply based on their historical performance. Does their style of play really mesh with your team? Are they a team player or all about their own person stats? Are they always looking for the party after practice or are they focused on the common goal of the organization, putting in the hard work and practice both on and off the field? Are they a leader in the locker room and do they inspire others and create an atmosphere of team work? The talented free agent can be as destructive as they are productive, especially considering the investment to sign them. A bad choice can lead to a long season.

In reality, we can’t be certain of every pick we make. This is why, as best as we can, we have to aim for depth. Putting all of your performance goals in the hands of a key man has long been known as poor organizational strategy. Good and bad individual performance aside, there are myriad other variables like illness, family emergencies, car problems, and other random life events that can take someone temporarily or permanently out of your lineup. That day when you need them, you’ll need to rely on the depth you have drafted, trained, and readied to perform. You may have heard the term “Next Man Up” in the NFL. High-performance teams know they have a plan and have trained other players to take on a needed role, step into position, and excel on game day as they’ve practiced again and again. More importantly, other team members believe they can do it. There is trust, and trust builds confidence.

That confidence creates solidarity and fortitude in moments of doubt. In the same 2014 season that Aaron Rodgers told fans to relax, the Patriots were declared to be “washed up” after an embarrassing loss to the Chiefs. People were suggesting Brady’s time to retire had come. People were wrong. The team rallied to take their fourth Super Bowl championship.

I am sure you can think of times in your organization when you had an impossible deadline, a client emergency, or a disruption in your staff where, suddenly, and just as planned, your team rallied to the occasion and reminded you of the importance of building strong teams. Good draft picks lead to good future leaders. As companies, we live in the draft year round. We’re not quite as seasonal as football teams. This makes our approach to talent all the more critical and why it can’t hurt to take a few notes from NFL teams who put their performance on display on national TV. They know a little something about building high performing teams.

The CTMS Gap: Improving the CTMS Experience for Study Teams

Vendor vs. Partner: 7 Service Solutions You Should Expect from Your eClinical Technology Provider

Come to the Dark (Mode) Side